It is certain that many are excited and welcome the Microsoft official announcement of SQL Server is going to support Linux platform. Specially the open source community must be thrilled with the news.

However, still there is not much information available to public about how SQL Server on Linux will looks like. As per Microsoft the initial release will be available on mid of 2017.

If we look at the history of SQL Server, the very early released versions were on UNIX based operating system known as OS/2 which is jointly developed by IBM and Microsoft. As per wikipedia the kernel type of OS/2 is mentioned as hybrid. That was 1988/89 period.

The SQL Server versions 1.0, 1.1, and 4.2 were all based on OS/2 platform. Microsoft had separately developed the version 4.2 to support for their first version of Windows NT OS but with the same features as in the version that runs on OS/2.

Historically, the SQL Server has born in UNIX based platform and later it has been ported to support only on Windows after ending the agreement with Sybase.

After 25 years later, Microsoft has decided to make SQL Server available on Linux platform which is a good move. 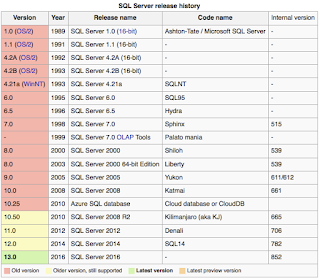 In my opinion, the main challenge would be to develop an abstraction layer to support Linux platform. The architecture of Windows and Linux are distinctly different. Both has preemptive scheduling but for the process model, Linux has very unique implementation of threads. SQL Server's process/threads model that runs in Windows is, single process multi-threading, meaning you can see only a single process for an SQL Server instance while internally it has thread pool to service for client requests. Consequently, thread is the unit of work at OS level to accomplish SQL Server requests in Windows.

Conversely, in Linux has multi processes and there is no concept called threads as in Windows OS. Linux calls fork() system call to create a child process from the parent process and then it is finished or killed. In a nutshell, in Linux, everything is done by in-terms of processes.

Bridging this architectural difference in SQL Server probably the most challenging part. I'm no expert in OS but if you think in software engineering point of view, this is the image I get about the abstraction layer.

SQL Server has it's own user mode operating system known as SQLOS which is non-preemptive scheduler to interact with the Windows OS to service better for special needs of SQL Server. The SQLOS was introduced in SQL Server 2005 code name Yukon.

What features will be in SQL Server on Linux?

It is unclear what features will be available in SQL Server version that runs on Linux. To provide full features set as in SQL Server 2016 would be a real challenge. Another question is, whether it will include the BI tools? As per the announcement blog, it clearly states "We are bringing the core relational database capabilities to preview today" What are the core relational database capabilities? I presume the following capabilities should definitely need be addressed. They are; scheduling, memory management, I/O, exception handling, ACID support, etc. How about high availability options like clustering and AlwaysOn? I predict there will be some sort of high availability option in the first release on Linux. How about the Page size, is it 8K or different? By default Linux page size is 4K (4096 Bytes), however SQL Server in Windows supports non-configurable page size which is 8K(8192 Bytes). Consequently, SQL Server on Linux has to support is default page size of 4K. However unlike in Windows, Linux page size is configurable but it is not certain how feasible and the consequences of doing it. I just checked the page size in Mac OS and it is 4K too. See below figure.

What this means to DBAs?

How about the Certifications?

Most likely, a new certification path will emerge to cater for the new trends/skills of SQL Server. To become a successful DBA, you might need to be qualified for SQL Server for both Linux and Windows platforms as well as cloud platforms.

How this will impact to other RDBMS products?

My sense is, this will impact directly to MySQL. MS SQL Server is a proven enterprise level data platform. If anyone has a chance to get that into Linux OS, then it is highly unlikely someone will choose MySQL besides SQL Server providing that SQL Server Developer edition is free.

I'm really excited and looking forward to get some hands on with SQL Server on Linux in very near future.